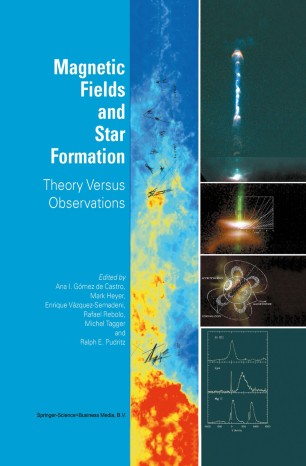 Magnetic Fields play a key role in the physics of star formation on all scales: from the formation of the large complexes of molecular clouds to the formation of solar-like planetary systems. The plasma physics involved is non-linear and very complex, which requires the development of large numerical codes. An additional difficulty is that the detection and study of magnetic fields is not easy from an observational point of view, and therefore theoretical models cannot easily be constrained.

In the week from April 21st to 25th in 2003, a meeting was held on the Campus of the Universidad Complutense de Madrid (Spain) to join theoretical and observational efforts to address these issues. The objective was to define a set of relevant problems for the physics of star formation that can be properly addressed with the current or near-future instruments.

This book summarizes the results of this intensive week of work. The book is written in a comprehensive manner and reviews our current knowledge of the subject. It also represents an updated account of the ideas and thoughts of the scientists working in the field of Star Formation. The contributions are presented in six chapters which correspond to the six fundamental issues (sessions) on which the discussion was focused during the workshop: the physics of turbulence in the Interstellar Medium (ISM), the formation of structure in the ISM, the formation of stars within dense cores of molecular gas, the physics of accretion disks, the physics of outflows and their interaction with the ISM, and the interaction between the stellar magnetosphere and accretion disk.

Each chapter starts with a comprehensive summary written by one of the editors, which includes input from the contributions as well as the editor's own thoughts on the subject. For all these reasons the book is well-suited as a primer to introduce graduate students in the richness of this field of research.