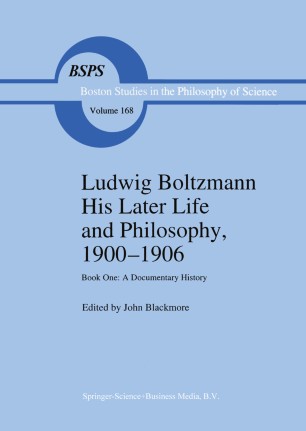 Book One: A Documentary History

Part of the Boston Studies in the Philosophy and History of Science book series (BSPS, volume 168)

2 But already he had done important work on thermal equilibrium which helped generalize Maxwell's distribution law. Indeed, there is part of a letter by James Clerk Maxwell to Loschmidt from this period which runs: "I am very pleased over the outstanding work of your student; in England experi­ mental physics is much neglected. Sir William Thomson has done the most in this connection, but you [in Austria] are ahead of us with your good example. "2 But while praise was fine, Boltzmann lusted after further travel. He wanted to know what other physicists were doing first hand. In 1870 he attended lectures by Bunsen and Konigsberger in Heid­ elberg, and in the same year went to Berlin only to scurry back to Vienna with the outbreak of the Franco-Prussian War, but Boltzmann was back in Berlin the next year attending lectures, visiting laboratories, and working on dielectricity more or less under the direction of Kirchhhoff and Helmholtz.