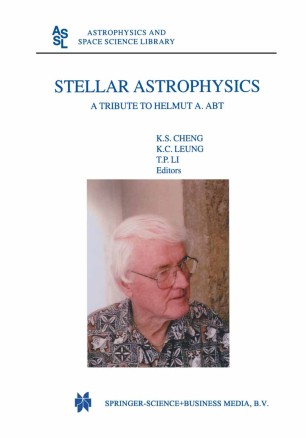 Stellar Astrophysics — A Tribute to Helmut A. Abt

The Pacific Rim Conferences for the first decade from the mid 1980's to the mid 1990's were primary concerned with binary stars research. The Conference expanded to all areas of Stellar Astrophysics for the last two meetings in Hong Kong; at Hong Kong University of Science and Technology in 1997 and at the Hong Kong University in 1999. At the conclusion of the very successful Pacific Rim Conference on Stellar Astrophysics held in Hong Kong University, members of the Sci­ entific Organizing Committee began planning for the next conference. We approached Professor Tan Lu of Nanjing University and Professor Tipei Li of the Institute of High Energy Physics about hosting a con­ ference in China. The city of Xi'an in Shaanxi province and a city in Yunnan province, were considered to be the most likely locations. It be­ came crucial to find the right person to serve as Chair (or Co-chairs) for the Local Organizing Committee. Initially, Professor Lu was the logical choice but he declined for personal reasons. Professor Li was invited to lead a new department of Astrophysics at Tsinghua University so he could not take on the additional load of chairing the LOC. Professor Gang Zhao of Beijing Astronomical Observatory was approached to take on the task but he also declined. This has been a busy time for Chinese astronomers. The SOC decided to have the conference dedicated to honor Dr. Helmut A.