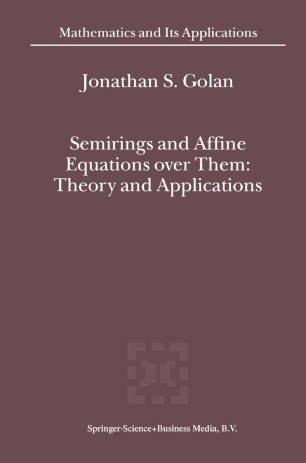 Semirings and Affine Equations over Them: Theory and Applications

Part of the Mathematics and Its Applications book series (MAIA, volume 556)

Semiring theory stands with a foot in each of two mathematical domains. The first being abstract algebra and the other the fields of applied mathematics such as optimization theory, the theory of discrete-event dynamical systems, automata theory, and formal language theory, as well as from the allied areas of theoretical computer science and theoretical physics. Most important applications of semiring theory in these areas turn out to revolve around the problem of finding the equalizer of a pair of affine maps between two semimodules. In this volume, we chart the state of the art on solving this problem, and present many specific cases of applications.

This book is essentially the third part of a trilogy, along with Semirings and their Applications, and Power Algebras over Semirings, both written by the same author and published by Kluwer Academic Publishers in 1999. While each book can be read independently of the others, to get the full force of the theory and applications one should have access to all three.

This work will be of interest to academic and industrial researchers and graduate students. The intent of the book is to bring the applications to the attention of the abstract mathematicians and to make the abstract mathematics available to those who are using these tools in an ad-hoc manner without realizing the full force of the theory.