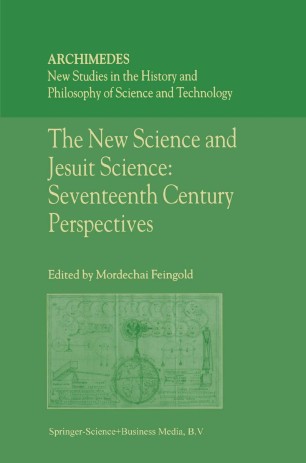 "One cannot talk about mathematics in the 16th and 17th centuries without seeing a Jesuit at every corner," George Sarton observed in 1940. * Sarton, of course, was not the first to recognize the disproportionate representation of members of the Society of Jesus in the scientific enterprise of the early modern period. However, unlike many historians who belittled the discernible numerical strength of the Jesuits on the grounds that they lacked originality and were generally hostile to new ideas, Sarton correlated numerical strength with significance. Hence his plea for collecting the papers of that industrious historian of Jesuit science, Henri Bosmans, was quite refreshing. Yet Sarton's appeal went unheeded, and not only with respect to Bosmans' papers. The perception of the Jesuits as plodding pedagogues and obscurantists remained as ingrained as ever, virtually sanctioning the disregard of their activities. Such neglect meant that the exact nature of the Jesuit contribution to the Scientific Revolution remained sketchy at best; only recently - owing to a long-overdue examination of the Order's archives and of published texts - have new contours begun to emerge. Striking in this reassessment is a more nuanced appreciation of the Jesuits' interaction with "modernity" and a far greater recognition of the Jesuit contribution to the two poles of modern science: the mathematization of natural philosophy and experimental science.