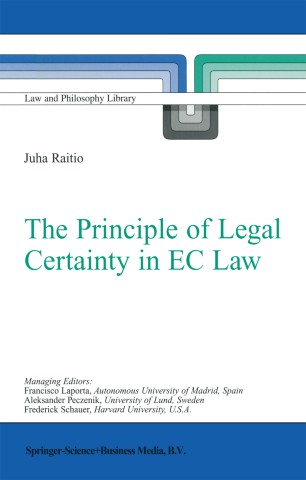 The Principle of Legal Certainty in EC Law

The intertwinement of EC law and national law may create unforeseeability in situations where EC law invades the national cases, which gives rise to the very question of legal certainty in EC law. This study contributes to the contemporary discussion, which wrestles with the following questions in particular:

- What have been the visions and objectives for European integration in the last decades?
- How to describe European Union as a political entity and a legal system?
- What is the relationship between legal certainty, rule of law, various general principles and human rights?
- What is the core of legal certainty on the basis of the case study?
- What kind of legal arguments and patterns of justification are there from a comparative perspective?
- How has the term 'legal certainty' been defined in the Nordic legal theory?
- How predictable and acceptable are the interpretations of the European Court of Justice - is it "running wild"?

Legal certainty relates to the principle of non-retroactivity and the protection of legitimate expectations in particular, but more profoundly it can be related to the conceptual scale for weighing up and balancing between formal justice and material fairness in legal decision-making. This scale is illustrated by presenting the terms 'formal', 'factual' and 'substantive' legal certainty.