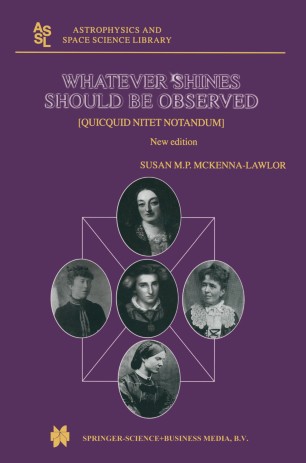 Whatever Shines Should be Observed

It is good to mark the new Millennium by looking back as well as forward. Whatever Shines Should Be Observed looks to the nineteenth century to celebrate the achievements of five distinguished women, four of whom were born in Ireland while the fifth married into an Irish family, who made pioneering contributions to photography, microscopy, astronomy and astrophysics.
The women featured came from either aristocratic or professional families. Thus, at first sight, they had many material advantages among their peers. In the ranks of the aristocracy there was often a great passion for learning, and the mansions in which these families lived contained libraries, technical equipment (microscopes and telescopes) and collections from the world of nature. More modest professional households of the time were rich in books, while activities such as observing the stars, collecting plants etc. typically formed an integral part of the children's education.
To balance this it was the prevailing philosophy that boys could learn, in addition to basic subjects, mathematics, mechanics, physics, chemistry and classical languages, while girls were channelled into 'polite' subjects like music and needlework. This arrangement allowed boys to progress to University should they so wish, where a range of interesting career choices (including science and engineering) was open to them. Girls, on the other hand, usually received their education at home, often under the tutelage of a governess who would not herself had had any serious contact with scientific or technical subjects. In particular, progress to University was not during most of the nineteenth century an option for women, and access to scientific libraries and institutions was also prohibited.
Although those women with aristocratic and professional backgrounds were in a materially privileged position and had an opportunity to 'see' through the activities of their male friends and relatives how professional scientific life was lived, to progress from their places in society to the professions required very special determination. Firstly, they had to individually acquire scientific and technical knowledge, as well as necessary laboratory methodology, without the advantage of formal training. Then, it was necessary to carve out a niche in a particular field, despite the special difficulties attending the publication of scientific books or articles by a woman. There was no easy road to science, or even any well worn track. To achieve recognition was a pioneering activity without discernible ground rules.
With the hindsight of history, we recognise that the heroic efforts which the women featured in this volume made to overcome the social constraints that held them back from learning about, and participating in, scientific and technical subjects, had a consequence on a much broader canvas. In addition to what they each achieved professionally they contributed within society to a gradual erosion of those barriers raised against the participation of women in academic life, thereby assisting in allowing University places and professional opportunities to gradually become generally available. It is a privilege to salute and thank the wonderful women of the nineteenth century herein described for what they have contributed to the women of today. William Herschel's famous motto quicquid nitet notandum (whatever shines should be observed) applies in a particular way to the luminous quality of their individual lives, and those of us who presently observe their shining, as well as those who now wait in the wings of the coming centuries to emerge upon the scene, can each see a little further by their light.