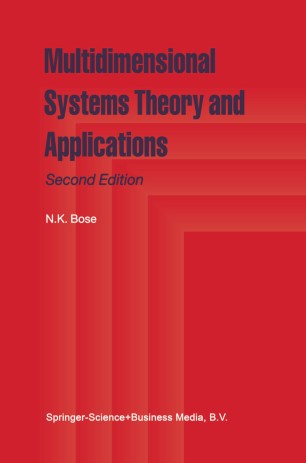 Preface to Second Edition From the time that the original edition was published in 1985, multidimensional systems theory has matured into a discipline of research and teaching with an expanding array of applications. The international journal on Multidimensional Systems and Signal Processing, founded in 1990, is now in its fourteenth year. A biannual international workshop on n-D systems was launched in 1998 and the impressive number of special sessions, mini-symposia, monographs and special issues that have emerged bear testimony to the growing popularity and importance of the subject -matter among scientists in various disciplines including engineering, computer science, geophysics and mathematics. This second edition builds on the fundamentals expounded in the original book with the addition of important developments in theory as well as practice since 1985. Particular attention has been given to the consolidation of basic results, uni­ fication of theory and the diversification of applications. Chapters that remain have been reordered and updated in content and references. Some chapters, considered to be somewhat outdated, have been replaced with newer proven as well as poten­ tially significant results, inspired by some groundbreaking research and directions which are likely to stimulate further research. In addition to the description of some challenging open problems, posed in 1985, which have since been solved, new problems yet to be tackled are also included.