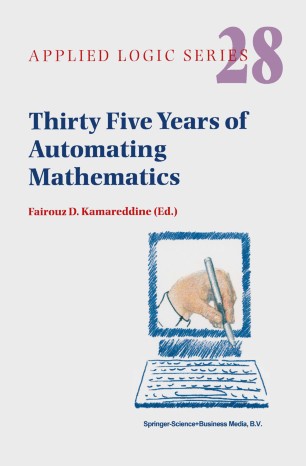 THIRTY FIVE YEARS OF AUTOMATING MATHEMATICS: DEDICATED TO 35 YEARS OF DE BRUIJN'S AUTOMATH N. G. de Bruijn was a well established mathematician before deciding in 1967 at the age of 49 to work on a new direction related to Automating Mathematics. By then, his contributions in mathematics were numerous and extremely influential. His book on advanced asymptotic methods, North­ Holland 1958, was a classic and was subsequently turned into a book in the well known Dover book series. His work on combinatorics yielded influential notions and theorems of which we mention the de Bruijn-sequences of 1946 and the de Bruijn-Erdos theorem of 1948. De Bruijn's contributions to mathematics also included his work on generalized function theory, analytic number theory, optimal control, quasicrystals, the mathematical analysis of games and much more. In the 1960s de Bruijn became fascinated by the new computer technology and as a result, decided to start the new AUTOMATH project where he could check, with the help of the computer, the correctness of books of mathematics. In each area that de Bruijn approached, he shed a new light and was known for his originality and for making deep intellectual contributions. And when it came to automating mathematics, he again did it his way and introduced the highly influential AUTOMATH. In the past decade he has also been working on theories of the human brain.