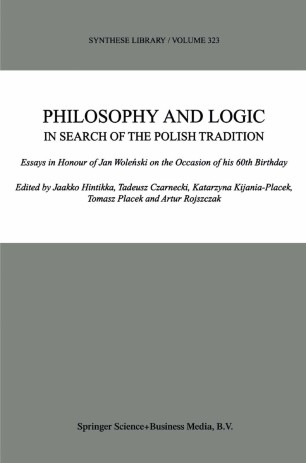 Philosophy and Logic in Search of the Polish Tradition

On the occasion of bis sixtieth birthday, we dedicate this volume to Jan Wo­ leriski-s-our teacher, our colleague, our friend. Both of us are particularly indebted to Jan not only with regards to profes­ sional matters, but some private ones as well. Hence, we hope that he forgives us an occasional lapse into fondness and affection. That said, may the list of bis personalmerits remain shrouded in mystery; rather than unveil them, we open here by appraising Jan's presence from a broader perspective. Tonote that Jan was not always a part of our lives would not evoke surprise. However, to imagine the Institute of Pbilosophy on Grodzka Street or Krakow pbilosophy without him in it would be a harder task-at least for us, Nonethe­ less, we do remember the days when he was commuting to Krakow as a guest lecturer. Is there anything about those days which particularly comes to mind? To shed light on the story which follows, one must begin by stating that the early 1980s when we were studying philosophy was not a bright period. The great masters of Krakow philosophy-Ingarden, Mehlberg, Zawirski, or Dambska-> were either dead or, for political reasons, kept silent. The years following Martial Law (1981-1983) were intellectually very blighted and barren. In the midst of all this we were attending Jan's course on general methodology.

"Considering the impressive list of contributors and the remarkable array of investigations that stand in the forefront of contemporary research, this is, without a doubt, a very good and recommended volume." (Natan Berber, The Review of Modern Logic 10:3-4, issue 32, 2005-2007)
Buy options