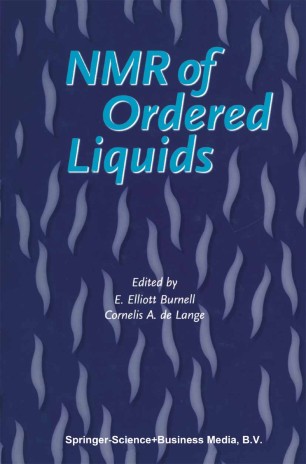 NMR of Ordered Liquids gives a unique overview of the scope and limitations of the NMR of oriented liquids, based on contributions from acknowledged experts in the field. The book consists of four sections:

-detailed general introduction which covers the basic principles and sophisticated experimental techniques;
-wide variety of applications ranging from NMR studies of small atoms and molecules in anisotropic liquids to the utilization of residual dipolar couplings for structure determination of biological molecules;
-summary of the sophisticated theoretical treatments, computer simulations, and phenomenological models for anisotropic intermolecular interactions that are widely used in the analysis of experimental results;
-overview of the dynamical aspects and relaxation processes relevant for orientationally ordered molecules.

"This book is a treasure trove of information regarding the applications of nuclear magnetic resonance spectroscopy to liquid crystals and ordered liquids ("complex fluids"). Burnell and de Lange have successfully edited a volume that deals with a topic of great significance to chemists. It is a collection of chapters written by some of the luminaries in the field, illustrating in a balanced fashion the various schools of thought from the viewpoint of both experimental practitioners and theoreticians.
Emphasis is placed on the interplay of fundamental science and theory with experimental work and technological developments that render the study of liquid crystals such an exciting area at the present time.
The subject of this book is most timely given the ubiquity of liquid crystals in displays, optoelectronic devices, telecommunications, and biomembranes. Its coverage provides a useful summary of the scope of NMR spectroscopy as applied to ordered liquids, including small organic solutes and various biomolecules. The volume is particularly relevant for those interested in applications of NMR to liquid crystals, determination of protein structure, and membranes. Beginning with the first principles of NMR spectroscopy, the book goes on to treat the relevant theoretical and experimental NMR methods. The individual contributions by the various authors are essentially a set of conceptually focused reviews, which together provide a complete survey of the subject. All the literature citations of the chapters are up-to-date as of the time of publication.
The book is heuristically organized into four interrelated sections, each a set of complementary chapters. Many of the chapters are theoretical, yet throughout the book there is also an emphasis on comparison to experimental work. Different competing hypotheses and proposals are presented by their proponents and compared to one another. The first part of the volume is an introduction to the principles of NMR spectroscopy and experimental methods as applied to ordered fluids. Density matrix theory is treated, followed by accounts of spatial and spin space manipulations, multiple quantum NMR, and spectral analysis of oriented solute molecules and mesogens.
The next section is a description of applications of NMR spectroscopy to spectral analysis of noble gases and molecules dissolved in nematic and smectic liquid crystals, proteins in the presence of discotic lyotropic mesophases (popularly known as bicelles), and solid-state NMR studies of membrane peptides. Relevant experimental methods and NMR pulse sequences are also included. Much of this work emphasizes the use of dipolar couplings for structural determination in the strongly and weakly coupled limits. Separated local field spectroscopy and its variants are covered, and for weak couplings, the use of alignment media to enable measurements of dipolar interactions is described. Enthusiasts of protein solution NMR and structural genomics will find descriptions of the Saupe order matrix and its relationship to NMR observables to be useful, including residual dipolar couplings and chemical shielding anisotropies.
In the third section, an overview is provided of the theoretical treatments and phenomenological models used to interpret experimental data for liquid crystals in terms of intermolecular interactions. Mean-field models based on a potential of mean torque are described in terms of anisotropic repulsions due to the molecular shape, together with longer range anisotropic dispersion forces and electrostatic attractions. The various paradigms encompass additive potential models, shape anisotropy including elastic restoring forces and the surface tensor model, and the chord model for flexible chain molecules oriented in mesogens. Comparison to computer simulation methods and atomistic force-field models constitutes a further useful aspect. An emphasis on flexible chain molecules in liquid crystalline mesophases in several of the chapters is important and timely.
The fourth and last part of the book is devoted to relaxation processes due to the molecular and collective dynamics of liquid crystals, as well as dynamical NMR spectroscopy. Contributions from internal motions of the mesogens, molecular motions, and order-director fluctuations (ODF) are all described within the framework of spectral density analysis. Treatments of flexible molecules including decoupling of molecular motions and ODF are illuminating. Low-frequency NMR field-cycling relaxometry is explained with regard to spatially confined liquid crystals, and pulsed field gradient methods for self-diffusion measurements in oriented lyotropic systems and membranes are nicely covered.
Finally, there is a lucid description of dynamic NMR spectral analysis applied to organic solutes in liquid crystals. It is a pleasure to see discussions throughout the volume of the seminal contributions of Noack to magnetic field cycling, Nordio to restricted rotational diffusion, and the Volds to spectral density analysis, all of which are lasting testaments to these innovators.
From a personal viewpoint, as I became immersed in the various chapters I found I could not put the book aside. Evidently, Burnell and de Lange have gone over every individual contribution and integrated the various developments, including cross-referencing of chapters, sections, and equations. Each of the various sections has a short perspective by the editors to help orient the reader, and the chapters each have an overview with a crisp summary. The result is a cohesiveness not always found in multi-author volumes. There is an attempt to unify the notation throughout the book, and the equations are all numbered hierarchically according to the chapter. The subject index makes it relatively easy to navigate around in the book, although I would have also preferred to see an author index. The book is fairly well-produced and the pages are sewn in signatures (increasingly a rarity), which should ensure long life. My only substantive complaint is that the glossy paper used in the book makes the volume difficult to annotate with pencil and unnecessarily expensive and heavy.
In summary, the book is highly significant to the chemical community, and its scope and subject are timely and appropriate. The editors are to be commended for integrating the individual contributions; the coherence of chapters by multiple authors is strength of the book that renders it appropriate for a graduate course in the subject. This volume is a must for all chemistry libraries, as well as any laboratory or group conducting serious work in NMR spectroscopy or liquid crystallography.

"This book is a treasure trove of information regarding the applications of nuclear magnetic resonance spectroscopy … . Burnell and de Lange have successfully edited a volume that deals with a topic of great significance to chemists. … as I became immersed in the various chapters I found I could not put the book aside. … chapters each have an overview with a crisp summary. The result is a cohesiveness not always found in multi-author volumes. … its scope and subject are timely and appropriate." (Michael F. Brown, Journal of the American Chemical Society, Vol. 126, 2004)