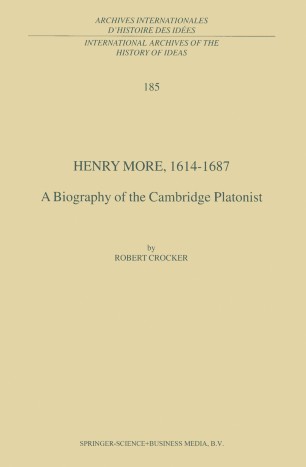 A Biography of the Cambridge Platonist

Henry More (1614-1687), the Cambridge Platonist, is often presented as an elusive and contradictory figure. An early apologist for the new natural philosophy and its rational support for Christian doctrine, More also defended the existence of witchcraft and wrote extensively on the nature of the soul and the world of spirits. A vigorous and prolific controversialist against many varieties of contemporary `atheism' and `enthusiasm', More was himself a spiritual perfectionist and illuminist, believing that the goal of the religious life was a conscious union with God.
Until now, most biographies of More have ignored these, his own, preoccupations, and have made of him a rather eccentric but important illustrative figure in one of several larger narratives dominated by canonical figures like Descartes, Boyle, Spinoza or Newton. This is the first modern biography to place his own religious and philosophical preoccupations centre-stage, and to provide a coherent interpretation of his work from a consideration of his own writings, their contexts and aims. It is also the first study of More to exploit the full range of his prolific writings and a number of unknown manuscripts relating to his life. In addition, it contains an annotated handlist of his extant correspondence.