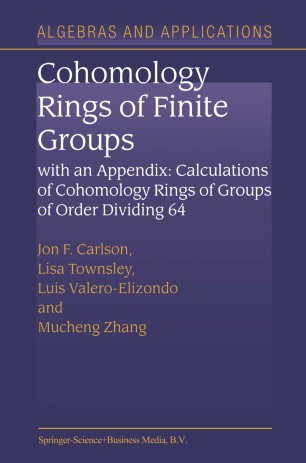 With an Appendix: Calculations of Cohomology Rings of Groups of Order Dividing 64

Part of the Algebras and Applications book series (AA, volume 3)

Group cohomology has a rich history that goes back a century or more. Its origins are rooted in investigations of group theory and num­ ber theory, and it grew into an integral component of algebraic topology. In the last thirty years, group cohomology has developed a powerful con­ nection with finite group representations. Unlike the early applications which were primarily concerned with cohomology in low degrees, the in­ teractions with representation theory involve cohomology rings and the geometry of spectra over these rings. It is this connection to represen­ tation theory that we take as our primary motivation for this book. The book consists of two separate pieces. Chronologically, the first part was the computer calculations of the mod-2 cohomology rings of the groups whose orders divide 64. The ideas and the programs for the calculations were developed over the last 10 years. Several new features were added over the course of that time. We had originally planned to include only a brief introduction to the calculations. However, we were persuaded to produce a more substantial text that would include in greater detail the concepts that are the subject of the calculations and are the source of some of the motivating conjectures for the com­ putations. We have gathered together many of the results and ideas that are the focus of the calculations from throughout the mathematical literature.