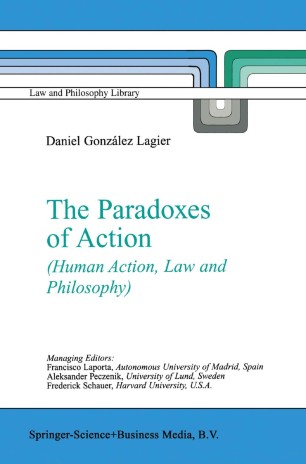 Through the combined effects of certain natural facts (connected with the passage of time), institutional acts (performed at various points within the university system) and bonds offriendship (forged over quite a number ofyears ofacademic life), I have lately become an occasional writer of forewords. It is certainly not a kind of work that dis­ pleases me; but it would be too much to say that I have learned to do it with ease. Quite to the contrary! Writing a foreword is, it seems to me, an example ofa rather complex action (al­ though, of course, much less complex than writing the book it accompanies). Infact, it is not even an action; it is rather an activity, carried out over a more or less prolonged period of time and typically including something like the following stages: deciding to write the foreword; carefully reading the book; taking notes; thinking about what would be appropriate aspects to be mentioned; sketching an outline; writing a first draft by hand; writing several corrected versions; typing the last ofthem into the computer; dis­ tributing it to several colleagues to see how they like it; correcting the text once more; sending it to the author of the book; delivering it to the publisher. Ineach of these ac­ tions (leaving aside for a moment purely mental actions such as thinking) we can in turn distinguish several components. These are, basically: bodily movements, intentions, and (intentionally or unintentionally produced) changes in the world.