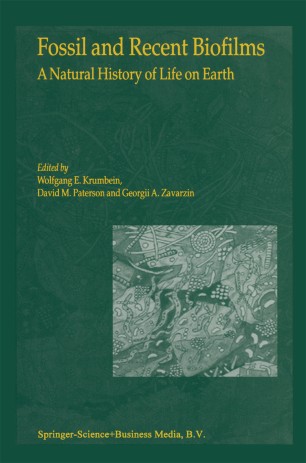 A Natural History of Life on Earth

MICROBIAL BIOFILMS: PROTECTIVE NICHES IN ANCIENT AND MODERN GEOMICROBIOLOGY J. W. Costerton and Paul Stoodley Center for Biofilm Engineering Montana State University As this book is published based on discussions of a conference that was held in 2001, it may be useful to provide an update on the most recent revelations about biofilms, so that this excellent exposition of the contribution of microbial biofilms to geological processes may be placed in a modem context. The importance of the contribution of microbial biofilms to global processes is only now being appreciated as it is revealed that all terrestrial surfaces are teeming with microbial life in the form of biofilm communities. These communities live on soil particles, in rock fissures, marine and river sediments and at the very extremes of terrestrial habitats from inside Antarctic ice to the walls of deep sea hydrothermal vents. The contribution of these biofilm communities generally went unrecognized because it was the water that was where microbiologists looked for life, not the surfaces, although, evidence of the early association of microbes with surfaces was in fact present in the fossil record (Rasmussen, 2000; Reysenbach, and Cady, 2001). It is also revealing that biofilm formation is found in prokaryotes from the most deeply rooted branches of the phylogenetic tree in both the Archaea and Bacteria kingdoms, the Korarchaeota and Aquificales respectively (Jahnke et al. 2001; Reysenbach et al. 2000).