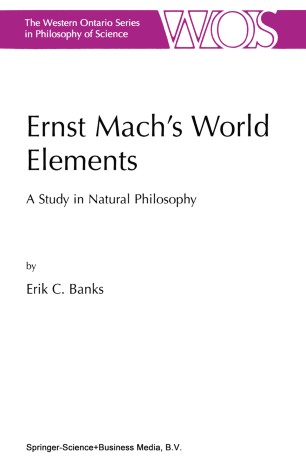 A Study in Natural Philosophy

Part of the The Western Ontario Series in Philosophy of Science book series (WONS, volume 68)

Ernst Mach (1838-1916) was a seminal philosopher-scientist and a deserving member of the canon of major twentieth-century thinkers. Yet, despite a healthy resurgence in Mach studies, he is still widely thought to represent a simplistic positivist, even sensationalist, position that does not at all reflect the depth of Mach's interests and subtlety as a philosopher. By exploring Mach's views on science as well as philosophy, this book attempts to wrest him free from his customary association with logical positivism and to reinterpret him on his own terms as a natural philosopher and naturalist about human knowledge. Mach's development and his influences from 19th century German philosophy and science are probed in great conceptual and historical detail, and attention is paid to his unpublished Nachlaß as well as to the affinities between Mach's thought and that of other major philosopher-scientists such as Einstein, Bertrand Russell, William James, Helmholtz, Riemann, Herbart and Kant. In particular, the book strives to set forth the true nature of Mach's sensation-elements, the motivations for his critique of the concepts of space and time in physics, and the real meaning of his famous critique of metaphysics. The author's work has appeared in Synthese, Kant-Studien, Studies in History and Philosophy of Modern Physics and the Journal of the History of the Behavioral Sciences, but here these inquiries are gathered into a unified historico-critical treatment that follows Mach's conceptual development and the culmination of his work in a unique and intriguing natural philosophy. Physicists, psychologists, philosophers of science, historians of twentieth-century thought and culture, and educators will find this volume a valuable help in interpreting Mach's ideas in a context that includes philosophy and science and the bridge between them.