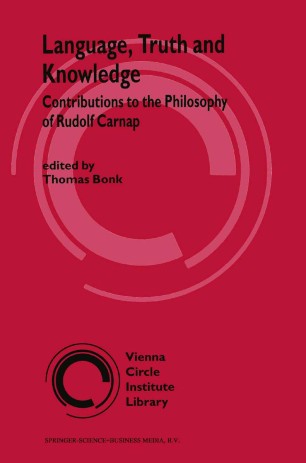 Contributions to the Philosophy of Rudolf Carnap

This collection originated at a conference organized by the Institute Vienna Circle and the University of Vienna on the Vienna Circle and Logical Empiricism and was held in Vienna in July 2001. (cf. The Vienna Orcle and Logical Empiricism. Re-evaluation and Future Perspectives. Edited by Frie­ drich Stadler. Dordrecht-Boston-London: Kluwer, 2003, Vienna Circle Institute Yearbook 10). All the essays in this volume with one exception are based on talks presented on that occasion and appear here for the first time. The contributions address a broad range of issues in the philosophy of Rudolf Carnap, but two themes stand out. Many authors respond directly or indirectly to objections against various aspects of Carnap's work: the pro gram of Der Logische Aufbau der Welt, his views on ontology and realism, and his explication of disposition predicates. w. v. Quine's shadow looms large. Rising to the challenge, these authors constructively modify Carnapian ideas or explore alternatives without abandoning key tenets of his empiri­ cism. As our understanding of Carnap's work in its historical context has become more nuanced and detailed over the past decade, the room for dis agreement over its interpretation has grown. Several of the papers aim to put the record straight with respect to such works as Logische Syntax der Sprache, Der Logische Aufbau der Welt, and Der Raum. This collection then attests to the continuing and growing attraction of Carnap's philosophy.