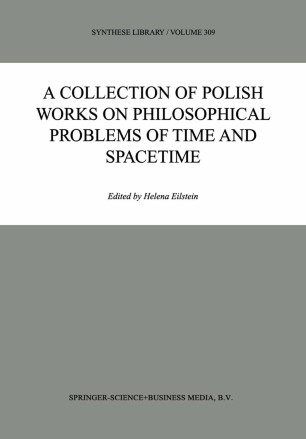 This is a collection of some works of Polish philosophers and physicists on philosophical problems of time and spacetime. Without restricting the thematic scope of the papers, the issue conceming objectivity of time flow runs as a uniting thread through most of them. Partly it is discussed directIy, and partly the authors focus on themes which are of paramount importance for one's attitude to that question. In the first six papers the authors deal with their topics against the background of contemporary physics, its theories, its difficulties and discussed conjectures. For the paper of S. Snihur that background is provided by everyday worId-outlook, and the author discusses the problem of existence and character of the future in the light of basic principles of cIassical logic. The paper of A. P61tawski, about the views of the outstanding polish philosopher Roman Ingarden, enriches the thematic scope of the coIIection introducing into it some questions from philosophical anthropology and ethics. JERZY GOLOSZ MOTION, SPACE, TIME*. Abstract. The paper discusses the properties of spacetime we study by analyzing the phenomenon of motion. Of special interest are the spacetime symmetries. the spacetime structures and the ontological status of spacetime. These problems are considered on the grounds of the c1assical theories of motion contained in Newtonian physics, special and general theory of relativity. The controversy between an absolute and a relational conception of motion and its ontological implications are also analyzed.

"[...]the volume provides the much-needed and appreciated service of making the contributions of contemporary Polish philosophers to the problem of time more widely accessible. For this, the editor and the publisher deserve the gratitude of the philosophical community."
(Christian Wüthrich, University of Pittsburgh in Erkenntnis, 60, 2004)
Buy options