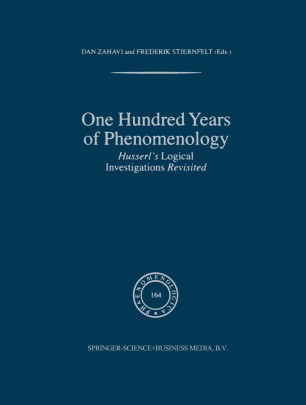 One Hundred Years of Phenomenology

Husserl himself considered Logical Investigations (1900-1901) to constitute his `breakthrough' to phenomenology, and it stands out not only as one of Husserl's most important works, but as a key text in twentieth century philosophy. By predating the split between `analytical philosophy' and `continental philosophy', Logical Investigations remains of particular interest to those concerned with the possibility of a rapprochement between the two traditions. The work had a tremendous influence on the subsequent development of phenomenology, and it also left its mark on such diverse disciplines as linguistics, comparative literature, psychology, cognitive science, and mathematics.
This volume commemorates the centenary of Logical Investigations by subjecting the work to a comprehensive critical analysis. It contains new contributions by leading scholars addressing some of the most central analyses to be found in the book.