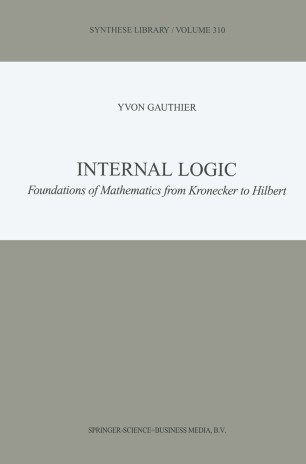 Foundations of Mathematics from Kronecker to Hilbert

Internal logic is the logic of content. The content is here arithmetic and the emphasis is on a constructive logic of arithmetic (arithmetical logic). Kronecker's general arithmetic of forms (polynomials) together with Fermat's infinite descent is put to use in an internal consistency proof. The view is developed in the context of a radical arithmetization of mathematics and logic and covers the many-faceted heritage of Kronecker's work, which includes not only Hilbert, but also Frege, Cantor, Dedekind, Husserl and Brouwer.

The book will be of primary interest to logicians, philosophers and mathematicians interested in the foundations of mathematics and the philosophical implications of constructivist mathematics. It may also be of interest to historians, since it covers a fifty-year period, from 1880 to 1930, which has been crucial in the foundational debates and their repercussions on the contemporary scene.