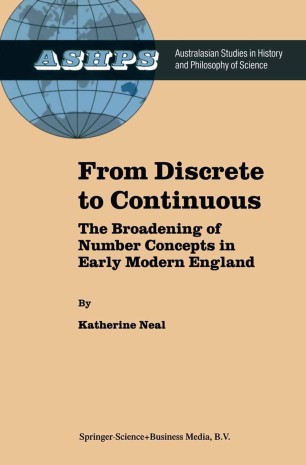 From Discrete to Continuous

The Broadening of Number Concepts in Early Modern England

Part of the Australasian Studies in History and Philosophy of Science book series (AUST, volume 16)

In the early modern period, a crucial transformation occurred in the classical conception of number and magnitude. Traditionally, numbers were merely collections of discrete units that measured some multiple. Magnitude, on the other hand, was usually described as being continuous, or being divisible into parts that are infinitely divisible. This traditional idea of discrete number versus continuous magnitude was challenged in the early modern period in several ways.