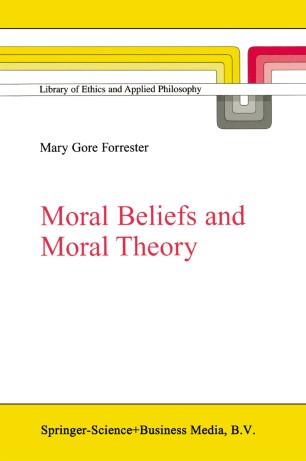 Part of the Library of Ethics and Applied Philosophy book series (LOET, volume 10)

Some time ago I wrote a book (Moral Language, 1982) in which I argued that moral judgments are capable of being true ('truth-apt,' to use a current phrase, or descriptive and having truth-value, to use a more traditional term), that the methods of discovering moral facts are fundamentally similar to those of discovering non-moral facts, and that moral judgments may be true. What I did not do at that time was to develop a moral theory which would demonstrate how the method of discovering moral truths would work and what the criteria of truth actually are. In a later work (Persons, Animals, and Fetuses, 1996) I did propose a moral theory as to what the criteria for moral truth are; however, I presented it primarily as an introduction to the discussion of several practical ethical issues and did not argue fully for that theory. It is high time that I did so, because without showing that such a theory can be developed my defense of moral realism is incomplete. It is all very well to say that we can discover what moral beliefs are true, but unless we can demonstrate just which beliefs are true, the thesis that we can discover this truth cannot be fully defended. For this reason the biggest (although not the only) challenge to showing that ethical objectivity is possible is the presence of moral disagreement - and the contention of many that such disagreement cannot be definitively resolved.