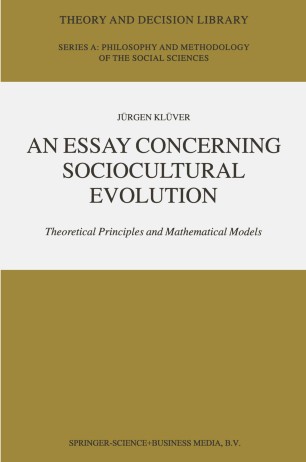 Writing about sociocultural evolution is always a complicated enterprise, because the subject is not only difficult in a scientific way but also in a political one. In particular since the events of September 11, 2001 the debates about the differences between cultures and their evolutionary developments have left the fields of pure scientific research once and for all. However, there have probably never been scientific discourses that did not touch the realms of political discussions - Darwin, Marx, the atomic physicists and the recent debates about genetic engineering are just a few examples. The aim of this book is not to take part in these debates but it is written as a contribution to the foundations of evolutionary theories in the social sciences. The readers will have to judge if I have succeeded with it. Perhaps essays like this one will help to clarify the problems we all have to face just now in regard to intercultural discourses. Theoretically and mathematically grounded insights into cultural development as the source of many political problems will not solve to how to deal with them them immediately but may serve as signposts in the long run.