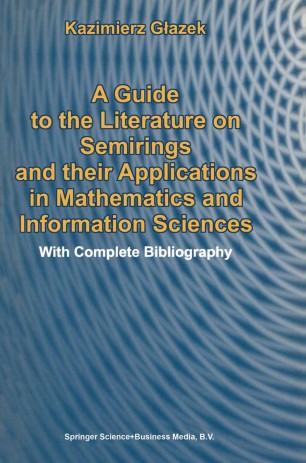 This volume presents a short guide to the extensive literature concerning semir­ ings along with a complete bibliography. The literature has been created over many years, in variety of languages, by authors representing different schools of mathematics and working in various related fields. In many instances the terminology used is not universal, which further compounds the difficulty of locating pertinent sources even in this age of the Internet and electronic dis­ semination of research results. So far there has been no single reference that could guide the interested scholar or student to the relevant publications. This book is an attempt to fill this gap. My interest in the theory of semirings began in the early sixties, when to­ gether with Bogdan W ~glorz I tried to investigate some algebraic aspects of compactifications of topological spaces, semirings of semicontinuous functions, and the general ideal theory for special semirings. (Unfortunately, local alge­ braists in Poland told me at that time that there was nothing interesting in investigating semiring theory because ring theory was still being developed). However, some time later we became aware of some similar investigations hav­ ing already been done. The theory of semirings has remained "my first love" ever since, and I have been interested in the results in this field that have been appearing in literature (even though I have not been active in this area myself).