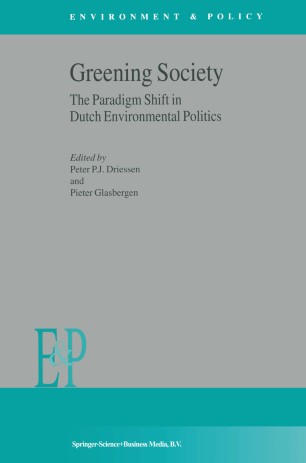 This book can be regarded as a monograph on the debates and developments in Dutch environmental policy. It has been written with a specific perspective in mind. First and foremost, the line of approach we have taken was from a multidisciplinary social science point of view. The trend in environmental policy is looked at from the angle of sociology, policy studies and political science. Secondly, all analyses depart from the paradigm shift concept. This particular paradigm shift is based on the fact that a radical change has taken shape over the years in the way environmental issues are handled. Previously, environmental policy had always been characterised by is top-down approach in which government determined the actual objectives of policy and assumed that it could win over business, non governmental organisations and citizens to act in line with those objectives. There was also a great deal of faith in the technical solutions to environmental issues. Today's environmental policy is based on a totally different philosophy. Environmental objectives are now reached in association with business, non-governmental organisations and citizens. These actors are also involved in bringing environmental policy into practice. In other words, the implementation of policy has a more interactive nature. New relationships emerge between government, the market and civil society, and policy discourses also become integrated. The environmental interest is more often weighed against the econom1c interests, the spatial development and against social justice.