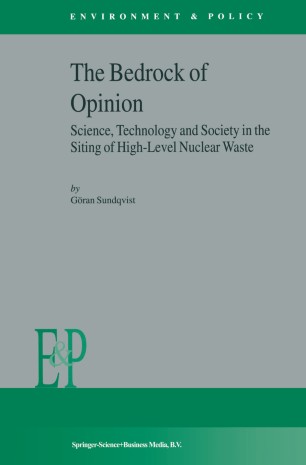 The Bedrock of Opinion

Science, Technology and Society in the Siting of High-Level Nuclear Waste

When did man discover nuclear waste? To answer this question, we first have to ask if nuclear waste really is something that could be called a scientific discovery, such as might deserve a Nobel Prize in physics. In early writings within nuclear energy research radioactive waste appears to be a neglected issue, a story never told. Nuclear waste first seems to appear when a public debate arose about public health risks of nuclear power in the late 1960s and early 70s. In nuclear physics, consensus was established at an early stage about the understanding of the splitting of uranium nuclei. The fission products were identified and their chains of disintegration and radioactivity soon were well­ established facts among the involved scientists, as was an awareness of the risks, for example the strong radioactivity of strontium and iodine, and the poisonous effects of plutonium. However, the by-products were never, either in part or in total, called or perceived as waste, just as fission by-products. How and where to dispose of the by-products were questions that were never asked by the pioneers of nuclear physics.