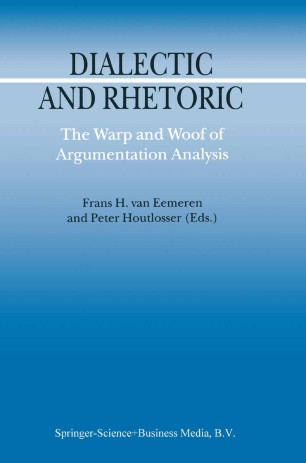 The Warp and Woof of Argumentation Analysis

In 1999 we invited a small number of colleagues to take part in a colloquium - voted to the analysis of argumentative discourse from two kinds of perspective: a dialectical and a rhetorical perspective. Our intention was to start a thorough disc- sion on the commonalities and differences between the two approaches. In this way we hoped to promote the development of analytic tools for dealing with argum- tation in which, in some way or other, the merits of both approaches are combined. The colloquium took place at the University of Amsterdam. In 2000 it was followed by a second colloquium at New York University, and in 2001 by a third one at Northwestern University. We are grateful to all three universities for giving us the chance to organize three exciting and fruitful meetings and we thank Eugene Garver, Eveline T. Feteris, M.A. van Rees, Ralph Johnson, A. Francisca Snoeck Hen- mans, Jose Plug, Bart Garssen, and Leah Polcar, who took part in the discussions but are not represented in this volume, for their critical and useful contributions.