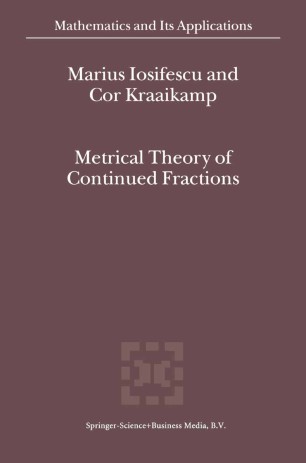 Part of the Mathematics and Its Applications book series (MAIA, volume 547)

This monograph is intended to be a complete treatment of the metrical the­ ory of the (regular) continued fraction expansion and related representations of real numbers. We have attempted to give the best possible results known so far, with proofs which are the simplest and most direct. The book has had a long gestation period because we first decided to write it in March 1994. This gave us the possibility of essentially improving the initial versions of many parts of it. Even if the two authors are different in style and approach, every effort has been made to hide the differences. Let 0 denote the set of irrationals in I = [0,1]. Define the (reg­ ular) continued fraction transformation T by T (w) = fractional part of n 1/w, w E O. Write T for the nth iterate of T, n E N = {O, 1, ... }, n 1 with TO = identity map. The positive integers an(w) = al(T - (W)), n E N+ = {1,2··· }, where al(w) = integer part of 1/w, w E 0, are called the (regular continued fraction) digits of w. Writing . for arbitrary indeterminates Xi, 1 :::; i :::; n, we have w = lim [al(w),··· , an(w)], w E 0, n--->oo thus explaining the name of T. The above equation will be also written as w = lim [al(w), a2(w),···], w E O.

"The authors present and prove the most recent developments in solving the celebrated 1812 Gauss’ problem which originated the metrical theory of continued fractions. At the same time, they study exhaustively the Perron-Frobenius operator, which is of basic importance in this theory, on various Banach spaces including that of functions of bounded variation on the unit interval. The book is of interest to research workers and advanced Ph. D. students in probability theory, stochastic processes and number theory." (Cryssoula Ganatsiou, Zentralblatt MATH, Vol. 1069 (20), 2005)

"While many excellent books on continued fractions are written, it is rare to see a book exclusively devoted to the material theory of these objects. … In addition to filling a hole in the mathematical literature, it does this very thoroughly. It gets around most topics related to the metrical theory of continued fractions … . The book is well suited for researchers and advanced graduate students working in functional analysis, probability and/or ergodic theory wishing to learn about the world of continued fractions." (Simon Kristensen, Zentralblatt MATH, Vol. 1122 (24), 2007)