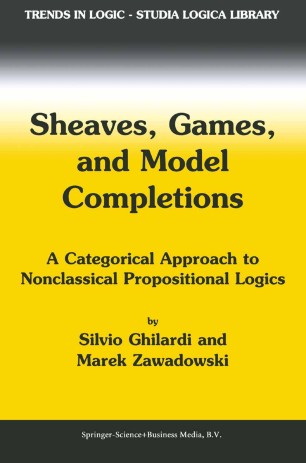 Part of the Trends in Logic book series (TREN, volume 14)

This book is an example of fruitful interaction between (non-classical) propo­ sitionallogics and (classical) model theory which was made possible due to categorical logic. Its main aim consists in investigating the existence of model­ completions for equational theories arising from propositional logics (such as the theory of Heyting algebras and various kinds of theories related to proposi­ tional modal logic ). The existence of model-completions turns out to be related to proof-theoretic facts concerning interpretability of second order propositional logic into ordinary propositional logic through the so-called 'Pitts' quantifiers' or 'bisimulation quantifiers'. On the other hand, the book develops a large number of topics concerning the categorical structure of finitely presented al­ gebras, with related applications to propositional logics, both standard (like Beth's theorems) and new (like effectiveness of internal equivalence relations, projectivity and definability of dual connectives such as difference). A special emphasis is put on sheaf representation, showing that much of the nice categor­ ical structure of finitely presented algebras is in fact only a restriction of natural structure in sheaves. Applications to the theory of classifying toposes are also covered, yielding new examples. The book has to be considered mainly as a research book, reporting recent and often completely new results in the field; we believe it can also be fruitfully used as a complementary book for graduate courses in categorical and algebraic logic, universal algebra, model theory, and non-classical logics. 1.