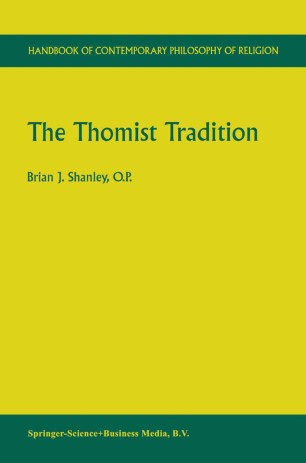 Part of the Handbook of Contemporary Philosophy of Religion book series (HCPR, volume 2)

The Thomistic tradition takes it name from the thirteenth-century religious thinker and saint who is its source and inspiration: the Dominican Friar Thomas 1 Aquinas. Aquinas understood himself to be a theologian, and that is what he was. This obvious biographical fact needs to be underlined at the beginning, however, 2 since it has often since been lost sight of in treatments of his thought. The reason for this is that Aquinas also developed a powerful, innovative, and comprehensive philosophy which has proved to be at least as perennial, if not more so, than the theological synthesis that it was originally designed to serve. His followers have kept both strains of his thought alive until this day, but not always combining the same dual expertise. Theology and philosophy have since become more distinct, and as each has fragmented into sub-disciplines of academic specialization, it becomes harder and harder for anyone to master the thought of Aquinas as a as evidenced by the whole. Yet grasping the whole is essential to grasping the part, master work of Aquinas's mind: his Summa theologiae. You cannot understand any part of the Summa unless you understand its place within the whole, and much violence has been done to Aquinas's thought by abstracting it from the larger context in order to present it in discrete units.