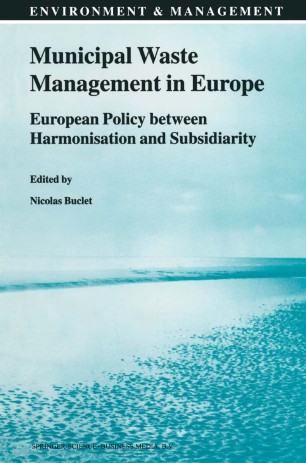 Nicolas Buclet Waste management issues can be approached in several ways. The question of which treatment technique to adopt is essentially a downstream problem. In our view the issue needed to be tackled further upstream. Waste management is not only a technical problem, it is also an area which involves various actors throughout society. In this book, as in the previous volume (Buclet, Godard, 2000), the organisation of waste management is seen in terms of regimes. A regime is an entire form ofinstitutional, technical, economic and social organisation relating to a specific field, no matter how complex that field is. Regime formation is generally a long-drawn-out process, rooted in the multiple interactions of the actors involved. Legislation plays a crucial role but would not, of itself, lead to the formation of a regime. There is always the old question of causality and which element occurs first: the behaviour of actors who constitute the reality, or the legislation that models their behaviour? Besides legislation, other formal or informal conventions influence the behaviour of actors approaching a common path, making co­ ordination easier between them. In this book we have insisted on conventional principles. They are the real guides for actors within each national regime.