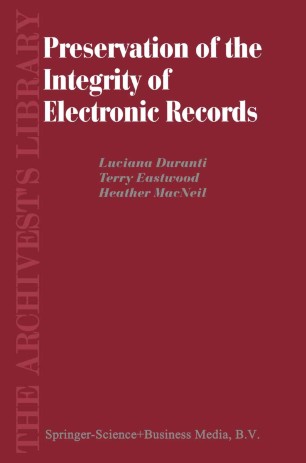 Preservation of the Integrity of Electronic Records

Part of the The Archivist’s Library book series (ARLI, volume 2)

By Terry Eastwood This book reports the findings of a research project on the means of protecting the integrity of active and semi-active electronic records. The project, which is commonly referred to as "the UBC Project," was conceived by two of the authors of this book, Luciana Duranti and Terry Eastwood, and conducted between 1994 and 1997. The third author, Heather MacNeil, who worked formally as the principal research assistant on the project, acted as an equal in the research and in the writing of this book. The project investigated a number of fundamental questions that have arisen over the past decade as a consequence of the rapid development and use of computer technology for the creation, maintenance, and preservation of recorded information. One of the first comprehensive studies of the issues associated with the management of electronic records was conducted by the United Nations. The study, commonly known as the ACCIS report, aimed to "develop guidelines for implementation of electronic archives and records management programmes for use by United Nations organizations, taking into account traditional archives and records management practices. " The report of the study of electronic records in eighteen United Nations organizations identified a number of enduring issues. It recognized that the United Nations had to "distinguish between record and non-record material. "l It recognized the problem of ensuring the authenticity of records, which, rather narrowly, it construed as "assuring legality.