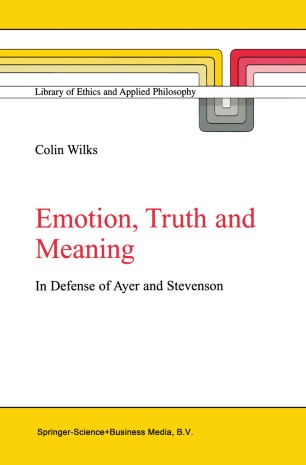 In Defense of Ayer and Stevenson

Part of the Library of Ethics and Applied Philosophy book series (LOET, volume 12)

The aim of this book is to defend the Emotive Theory of Ethics, and, in particular, the versions of that theory proposed by A. J. Ayer in Language, Truth and Logic (1936) and by C. L. Stevenson in Ethics and Language (1944). For those readers who are familiar with the conventional history of Twentieth Century moral philosophy and the infamous place which the Emotive Theory occupies in that history, the question which may well spring to mind at this point is 'Why bother?' In order to answer this question, however, I will need to provide a rough sketch of the very unconventional history of Twentieth Century moral philosophy which inspired me to 'resurrect' a theory which most modem moral philosophers have long assumed to be safely dead and buried. From the very outset, the Emotive Theory (ET) was a misunderstood, misrepresented and unjustly ridiculed theory, but, contrary to what one might expect, it has, with the passing of time, become an even more misunderstood, misrepresented and unjustly ridiculed theory.