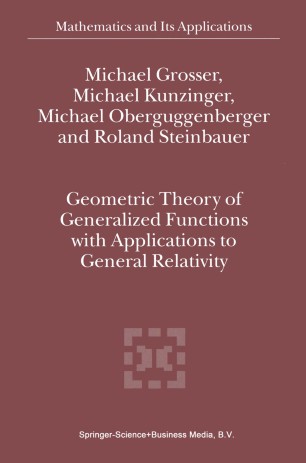 Geometric Theory of Generalized Functions with Applications to General Relativity

Part of the Mathematics and Its Applications book series (MAIA, volume 537)

Over the past few years a certain shift of focus within the theory of algebras of generalized functions (in the sense of J. F. Colombeau) has taken place. Originating in infinite dimensional analysis and initially applied mainly to problems in nonlinear partial differential equations involving singularities, the theory has undergone a change both in in­ ternal structure and scope of applicability, due to a growing number of applications to questions of a more geometric nature. The present book is intended to provide an in-depth presentation of these develop­ ments comprising its structural aspects within the theory of generalized functions as well as a (selective but, as we hope, representative) set of applications. This main purpose of the book is accompanied by a number of sub­ ordinate goals which we were aiming at when arranging the material included here. First, despite the fact that by now several excellent mono­ graphs on Colombeau algebras are available, we have decided to give a self-contained introduction to the field in Chapter 1. Our motivation for this decision derives from two main features of our approach. On the one hand, in contrast to other treatments of the subject we base our intro­ duction to the field on the so-called special variant of the algebras, which makes many of the fundamental ideas of the field particularly transpar­ ent and at the same time facilitates and motivates the introduction of the more involved concepts treated later in the chapter.