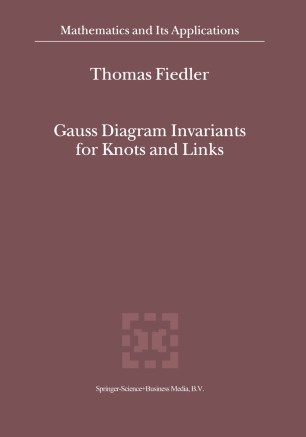 Part of the Mathematics and Its Applications book series (MAIA, volume 532)

Gauss diagram invariants are isotopy invariants of oriented knots in- manifolds which are the product of a (not necessarily orientable) surface with an oriented line. The invariants are defined in a combinatorial way using knot diagrams, and they take values in free abelian groups generated by the first homology group of the surface or by the set of free homotopy classes of loops in the surface. There are three main results: 1. The construction of invariants of finite type for arbitrary knots in non­ orientable 3-manifolds. These invariants can distinguish homotopic knots with homeomorphic complements. 2. Specific invariants of degree 3 for knots in the solid torus. These invariants cannot be generalized for knots in handlebodies of higher genus, in contrast to invariants coming from the theory of skein modules. 2 3. We introduce a special class of knots called global knots, in F x lR and we construct new isotopy invariants, called T-invariants, for global knots. Some T-invariants (but not all !) are of finite type but they cannot be extracted from the generalized Kontsevich integral, which is consequently not the universal invariant of finite type for the restricted class of global knots. We prove that T-invariants separate all global knots of a certain type. 3 As a corollary we prove that certain links in 5 are not invertible without making any use of the link group! Introduction and announcement This work is an introduction into the world of Gauss diagram invariants.