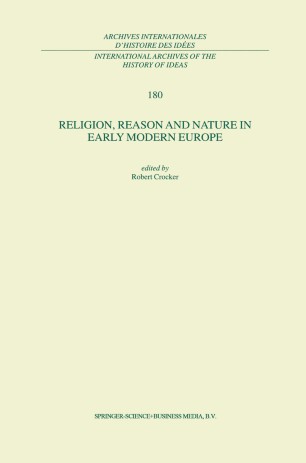 From a variety of perspectives, the essays presented here explore the profound interdependence of natural philosophy and rational religion in the `long seventeenth century' that begins with the burning of Bruno in 1600 and ends with the Enlightenment in the early Eighteenth century. From the writings of Grotius on natural law and natural religion, and the speculative, libertin novels of Cyrano de Bergerac, to the better-known works of Descartes, Malebranche, Cudworth, Leibniz, Boyle, Spinoza, Newton, and Locke, an increasing emphasis was placed on the rational relationship between religious doctrine, natural law, and a personal divine providence. While evidence for this intrinsic relationship was to be located in different places - in the ideas already present in the mind, in the observations and experiments of the natural philosophers, and even in the history, present experience, and prophesied future of mankind - the result enabled and shaped the broader intellectual and scientific discourses of the Enlightenment.