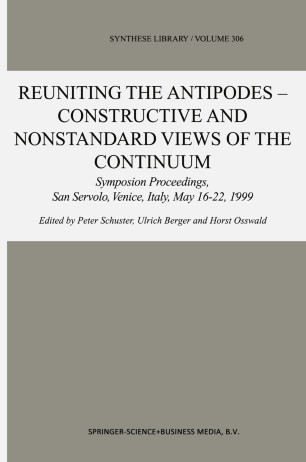 Reuniting the Antipodes — Constructive and Nonstandard Views of the Continuum

At first glance, Robinson's original form of nonstandard analysis appears nonconstructive in essence, because it makes a rather unrestricted use of classical logic and set theory and, in particular, of the axiom of choice. Recent developments, however, have given rise to the hope that the distance between constructive and nonstandard mathematics is actually much smaller than it appears. So the time was ripe for the first meeting dedicated simultaneously to both ways of doing mathematics – and to the current and future reunion of these seeming opposites.

Consisting of peer-reviewed research and survey articles written on the occasion of such an event, this volume offers views of the continuum from various standpoints. Including historical and philosophical issues, the topics of the contributions range from the foundations, the practice, and the applications of constructive and nonstandard mathematics, to the interplay of these areas and the development of a unified theory.