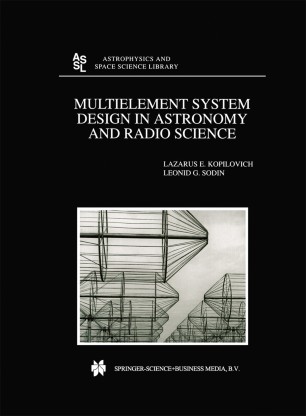 The multielement systems have been widely used in many fields of astron­ omy and radio science in the last decades. This is caused by the increasing demands on the resolution and sensitivity of such systems over the wide range of the electromagnetic wavelengths, from gamma up to radio. The ground-based optical and radio interferometers, gamma-ray and X-ray or­ bital telescopes, antenna arrays of radio telescopes and also some other radio devices belong to scientific instruments using multielement systems. There­ fore, the current problems of the optimal construction of such systems, or precisely, those of searching for the best arrangement of the elements in them, were formulated. A rather large number of scientific papers, including those of the authors, is devoted to these problems, and we believe that the time has come to integrate the basic results of the papers into the mono­ graph. The offered book consists of three parts. The first part is concerned with the optimal synthesis of optical and radio interferometers of various types and purposes; the synthesis of non-equidistant antenna arrays is con­ sidered in the second part; and the methods for the construction of coded masks for X-ray and gamma-ray orbital telescopes are expounded in the third one. Since in the text combinatorial constructions which are little known to astronomers are used, the necessary information is given in the appendices. Various tables containing the parameters of the systems consid­ ered are also represented.