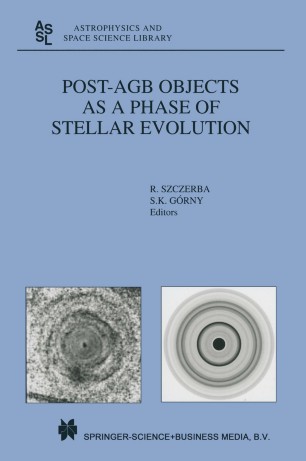 Post-AGB Objects as a Phase of Stellar Evolution

The term proto-planetary nebulae (PPNe) in the context of the late stages of stellar evolution was created only slightly more than 20 years ago to express the belief that in the near future these objects will become planetary nebulae (PNe). The first proto-planetary nebulae (called also post-Asymptotic Giant Branch, or shortly post-AGB objects) AFGL 2688 and AFGL 618 were discovered in mid­ seventies in course of the Air Force Sky Survey. Investigation of this phase of stellar evolution developed very rapidly in 1980's after the IRAS mission when it became clear that proto-planetary nebulae emit a significant part of their energy in the mid-and far-infrared. Hundreds of new candidates have been proposed but the recognition of the real proto-planetary nebulae is not a simple task and needs a substantial effort to exclude cases that represent different evolutionary stages. High resolution spectroscopy of stellar atmospheres is of much importance in this respect. Surprisingly, only a small group of central stars, the so called 21 11m emitters, show chemical signatures of the 3 rd dredge­ up process. Very recently, a more detailed studies of mid-infrared spectra from the Infrared Space Observatory (ISO) allow for a better understanding of chemical composition and evolution of circumstellar material around these stars. A new impetus in the field of proto-planetary nebulae research was started in the 1990's with high spatial resolution imaging in mid-infrared and optical wavelength ranges.