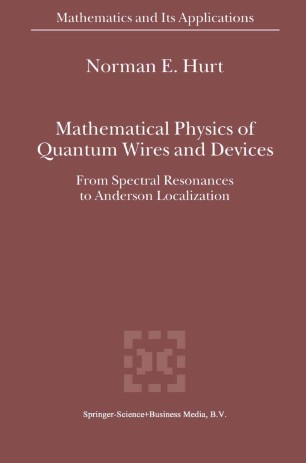 From Spectral Resonances to Anderson Localization

Part of the Mathematics and Its Applications book series (MAIA, volume 506)

This monograph on quantum wires and quantum devices is a companion vol­ ume to the author's Quantum Chaos and Mesoscopic Systems (Kluwer, Dordrecht, 1997). The goal of this work is to present to the reader the mathematical physics which has arisen in the study of these systems. The course which I have taken in this volume is to juxtapose the current work on the mathematical physics of quantum devices and the details behind the work so that the reader can gain an understanding of the physics, and where possible the open problems which re­ main in the development of a complete mathematical description of the devices. I have attempted to include sufficient background and references so that the reader can understand the limitations of the current methods and have direction to the original material for the research on the physics of these devices. As in the earlier volume, the monograph is a panoramic survey of the mathe­ matical physics of quantum wires and devices. Detailed proofs are kept to a min­ imum, with outlines of the principal steps and references to the primary sources as required. The survey is very broad to give a general development to a variety of problems in quantum devices, not a specialty volume.