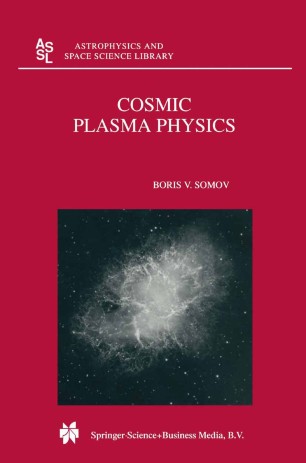 of the approximation at hand will be outlined from the viewpoint of physics rather than of many possible astronomical applications. After that, as an aid to detailed understanding, please return with pencil and paper to work out the missing steps (if any) in the formal mathematics. On the basis of such an approach the student interested in modern astro­ physics, its current practice, will find the answers to two key questions: (1) what approximation is the best one (the simplest but sufficient) for descrip­ tion of a phenomenon in cosmic plasma; (2) how tO,build an adequate model for the phenomenon, for example, a solar flare. Practice is really important for understanding the theory of cosmic plasma. Related exercises (problems and answers supplemented to each chapter) to improve skill do not thwart the theory but serve to better understanding of cosmic plasma physics. As for the applications, preference evidently is given to physical processes in the solar plasma. Why? - Much attention to solar plasma physics is con­ the possibility of th~ all-round observational test of theoretical ditioned by models. This statement primarily relates to the processes in the solar atmo­ sphere. For instance, flares on the Sun, in contrast to those on other stars as well as a lot of other analogous phenomena in the Universe, can be seen in their development, i. e.