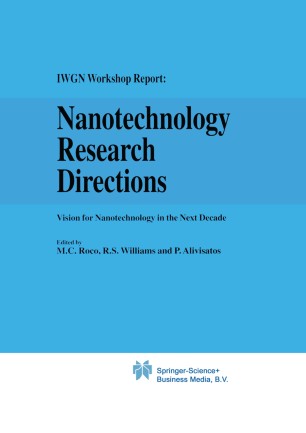 Vision for Nanotechnology R&D in the Next Decade

energy production, environmental management, transportation, communication, computation, and education. As the twenty-first century unfolds, nanotechnology's impact on the health, wealth, and security of the world's people is expected to be at least as significant as the combined influences in this century of antibiotics, the integrated circuit, and human-made polymers. Dr. Neal Lane, Advisor to the President for Science and Technology and former National Science Foundation (NSF) director, stated at a Congressional hearing in April 1998, "If I were asked for an area of science and engineering that will most likely produce the breakthroughs of tomorrow, I would point to nanoscale science and engineering. " Recognizing this potential, the White House Office of Science and Technology Policy (OSTP) and the Office of Management and Budget (OMB) have issued a joint memorandum to Federal agency heads that identifies nanotechnology as a research priority area for Federal investment in fiscal year 2001. This report charts "Nanotechnology Research Directions," as developed by the Interagency W orking Group on Nano Science, Engineering, and Technology (IWGN) of the National Science and Technology Council (NSTC). The report incorporates the views of leading experts from government, academia, and the private sector. It reflects the consensus reached at an IWGN-sponsored workshop held on January 27-29, 1999, and detailed in contributions submitted thereafter by members of the V. S. science and engineering community. (See Appendix A for a list of contributors.