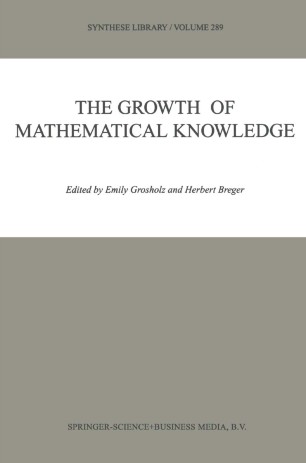 The Growth of Mathematical Knowledge

Mathematics has stood as a bridge between the Humanities and the Sciences since the days of classical antiquity. For Plato, mathematics was evidence of Being in the midst of Becoming, garden variety evidence apparent even to small children and the unphilosophical, and therefore of the highest educational significance. In the great central similes of The Republic it is the touchstone ofintelligibility for discourse, and in the Timaeus it provides in an oddly literal sense the framework of nature, insuring the intelligibility ofthe material world. For Descartes, mathematical ideas had a clarity and distinctness akin to the idea of God, as the fifth of the Meditations makes especially clear. Cartesian mathematicals are constructions as well as objects envisioned by the soul; in the Principles, the work ofthe physicist who provides a quantified account ofthe machines of nature hovers between description and constitution. For Kant, mathematics reveals the possibility of universal and necessary knowledge that is neither the logical unpacking ofconcepts nor the record of perceptual experience. In the Critique ofPure Reason, mathematics is one of the transcendental instruments the human mind uses to apprehend nature, and by apprehending to construct it under the universal and necessary lawsofNewtonian mechanics.

`The print and paper are of highly quality. Overall it is a rich and thought-provoking contribution to a relatively undeveloped area of research. The philosophy of the growth of mathematical knowledge has few canonical texts as yet. This book may become one.'
Philosophia Mathematica, 10:1 (2002)