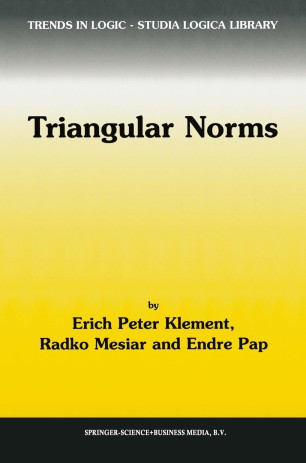 Part of the Trends in Logic book series (TREN, volume 8)

The history of triangular norms started with the paper "Statistical metrics" [Menger 1942]. The main idea of Karl Menger was to construct metric spaces where probability distributions rather than numbers are used in order to de­ scribe the distance between two elements of the space in question. Triangular norms (t-norms for short) naturally came into the picture in the course of the generalization of the classical triangle inequality to this more general set­ ting. The original set of axioms for t-norms was considerably weaker, including among others also the functions which are known today as triangular conorms. Consequently, the first field where t-norms played a major role was the theory of probabilistic metric spaces ( as statistical metric spaces were called after 1964). Berthold Schweizer and Abe Sklar in [Schweizer & Sklar 1958, 1960, 1961] provided the axioms oft-norms, as they are used today, and a redefinition of statistical metric spaces given in [Serstnev 1962]led to a rapid development of the field. Many results concerning t-norms were obtained in the course of this development, most of which are summarized in the monograph [Schweizer & Sklar 1983]. Mathematically speaking, the theory of (continuous) t-norms has two rather independent roots, namely, the field of (specific) functional equations and the theory of (special topological) semigroups.

"The book is very well written and constitutes a valuable addition to the literature on t-norms and, in general fuzzy reasoning. It presents almost all of the most important developments of fuzzy sets and fuzzy logic by focusing on the central concept of triangular norm. It is divided into two parts and an appendix, which gives a summary of the existing families of t-norms."
(Mathematical Reviews, 2002a)
Buy options