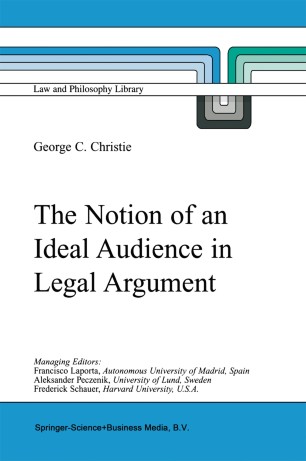 The Notion of an Ideal Audience in Legal Argument

As the dedication ofthis book suggests, the genesis ofthis book arises from my association with Cha'im Perelman. Because I was one of the few Americans to comment on his TraUe de l' argumentation: la nouvelle rhetorique, before it was translated into English, I was invited to a conference celebrating the translation ofthat monumental work into English that was held in August 1970 in Santa Barbara, Califomia at the Center for the Study ofDemocratic Institutions, which was then under the directorship of the late Robert M. Hutchins. From that beginning, Professor Perelman and I developed a strong and warm friendship which was cemented when Professor Perelman and his wife, Fela, came to North Carolina in 1979 as a fellow at the National Humanities Center. I enjoyed the occasions on which I was able to participate in the activities of the Centre National de Recherehes de Logique which had been established, under Professor Perelman's aegis, in Belgium. A trip to Brussels was always something to which I looked forward. Since Professor Perelman's sudden and untimely death in January 1984, shortly after he had been singularly honored by being made a baron by King Baudouin, I have benefited greatly from my participation in the programs of the Perelman Foundation which was established through the generosity and efforts ofBaronne Fela Perelman; a remarkable woman in her own right who has now sadly also passed away.