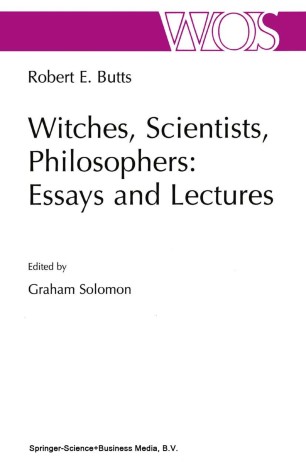 Part of the The Western Ontario Series in Philosophy of Science book series (WONS, volume 65)

Robert E. Butts (1928-1997) was a philosopher and historian of science whose central concerns were the distinction between the rational and the irrational. He viewed scientific rationality as our major defence against the various conditions that encourage witch hunts and similar outbursts of irrationality, with all their attendant pain and terror. Butts saw himself as a pragmatic realist, combining what he took to be the best aspects of logical empiricism with a historically informed pragmatism, deeply appreciative of the methods of science, trying to describe a kind of rationality essential in the struggle to preserve human values.
This volume gathers previously unpublished essays and lectures with some previously published, thematically related essays. It includes essays and lectures on philosophical aspects of the European witch hunt, on scientific rationality and methodology, and on the relationships between science and philosophy exhibited in the writings of such historically significant figures as Leibniz, D'Alembert, Hume, Kant, Carnap and Kuhn.