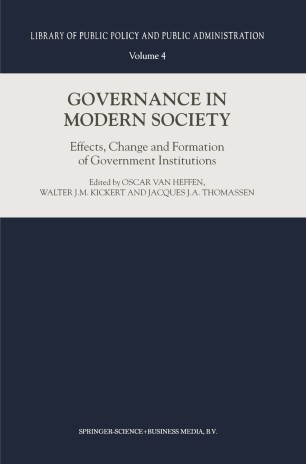 This book is the immediate result of the co-operation of a great number of scholars in the Netherlands Institute of Government (NIG). NIG is an interuniversity research school. As such it has a double task. In addition to offering a Ph.D program to students in Public Administration it also is a research institute in which a great number of scholars from seven Dutch universities participate and work on a common research program. The chapters in this book are all products of the research program that started in 1995. This program had the ambition to explore the frontiers of the discipline in two respects. First by studying a number of recent developments in society and their consequences for the functioning of government. These consequences can be summarised as the development of a system of multi level and multi actor governance. Second, by contributing to the knowledge of institutions, both by studying what factors are most important in the formation and change of institutions and by studying the effects of institutions on the behaviour of actors in different political and administrative settings. Most contributions to this volume either have their origin in conferences organized by the NIG or were published as an NIG working paper. We are grateful to Marcia Clifford and Connie Hoekstra who prepared the final version of the manuscript, to Ian Priestnall who took care of the language editing and to an anonymous reviewer whose comments were gratefully used.