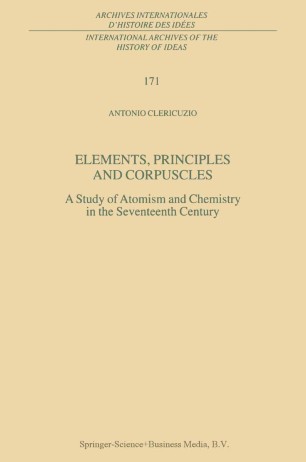 A Study of Atomism and Chemistry in the Seventeenth Century

In Elements, Principles and Particles, Antonio Clericuzio explores the relationships between chemistry and corpuscular philosophy in the age of the Scientific Revolution. Science historians have regarded chemistry and corpuscular philosophy as two distinct traditions. Clericuzio's view is that since the beginning of the 17th century atomism and chemistry were strictly connected. This is attested by Daniel Sennert and by many hitherto little-known French and English natural philosophers. They often combined a corpuscular theory of matter with Paracelsian chemical (and medical) doctrines. Boyle plays a central part in the present book: Clericuzio redefines Boyle's chemical views, by showing that Boyle did not subordinate chemistry to the principles of mechanical philosophy. When Boyle explained chemical phenomena, he had recourse to corpuscles endowed with chemical, not mechanical, properties. The combination of chemistry and corpuscular philosophy was adopted by a number of chemists active in the last decades of the 17th century, both in England and on the Continent.
Using a large number of primary sources, the author challenges the standard view of the corpuscular theory of matter as identical with the mechanical philosophy. He points out that different versions of the corpuscular philosophy flourished in the 17th century. Most of them were not based on the mechanical theory, i.e. on the view that matter is inert and has only mechanical properties. Throughout the 17th century, active principles, as well as chemical properties, are attributed to corpuscles. Given its broad coverage, the book is a significant contribution to both history of science and history of philosophy.