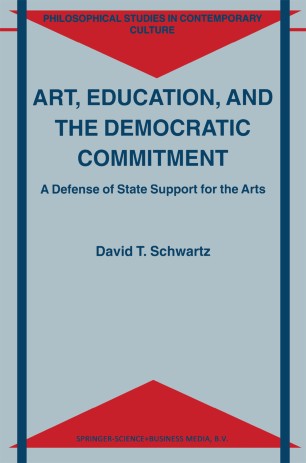 Art, Education, and the Democratic Commitment

A Defence of State Support for the Arts

In reflecting on this book and the process of writing it, the most pervasive theme I find is that of confluence. I drew much of the energy needed to write the book from the energy that resides at the confluence, or nexus, of contrasting ideas. At the most general level, the topic of arts subsidy offered a means of exploring simultaneously two of my favorite philosophical subjects-aesthetics and politics. The risk of a dual focus is of course that you do neither topic justice. However, the bigger payoff of this strategy resides in finding new and interesting connections between two otherwise disparate topics. Developing such connections between art and politics led directly to many of the book's positive arguments for subsidy. At a deeper level, the book exploits a confluence of contrasting philosophical methodologies. The central problem of the book­ politically justifying state support of the arts-is cast in the Anglo­ American tradition of analytical philosophy. Here normative arguments of ethics and politics are scrutinized with an eye toward developing a defensible justification of state action. Yet while the book initially situates the subsidy problem within this analytical tradition, its positive arguments for subsidy draw heavily from the ideas and methods of Continental philosophy. Rather than adjudicating normative claims of ethical and political ttuth, the Continental tradition aims at the hermeneutical task of interpreting and describing sttuctures of human meaning.