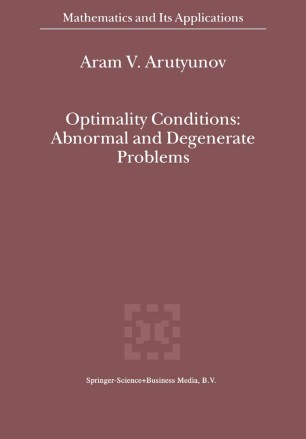 Part of the Mathematics and Its Applications book series (MAIA, volume 526)

This book is devoted to one of the main questions of the theory of extremal prob­ lems, namely, to necessary and sufficient extremality conditions. It is intended mostly for mathematicians and also for all those who are interested in optimiza­ tion problems. The book may be useful for advanced students, post-graduated students, and researchers. The book consists of four chapters. In Chap. 1 we study the abstract minimization problem with constraints, which is often called the mathemati­ cal programming problem. Chapter 2 is devoted to one of the most important classes of extremal problems, the optimal control problem. In the third chapter we study one of the main objects of the calculus of variations, the integral quadratic form. In the concluding, fourth, chapter we study local properties of smooth nonlinear mappings in a neighborhood of an abnormal point. The problems which are studied in this book (of course, in addition to their extremal nature) are united by our main interest being in the study of the so called abnormal or degenerate problems. This is the main distinction of the present book from a large number of books devoted to theory of extremal problems, among which there are many excellent textbooks, and books such as, e.g., [13, 38, 59, 78, 82, 86, 101, 112, 119], to mention a few.